This is by far the fastest, leanest, and the most stable PIVX wallet release we’ve ever had. It also includes many usability improvements and bug fixes over the previous versions and sets the foundation needed for the 5.0 privacy release coming later this quarter. It includes some Sapling protocol code PR (1553 and 1666), though in a disabled state until 5.0 release.

Core wallet v4.1.1 or higher is compatible with v4.3.0. So upgrade isn’t compulsory, but is highly recommended as always.

The chainstate database (which is used for tracking UTXOs) has been changed from a per-transaction model to a per-output model. As a result, validating the blockchain during Initial Block Download (IBD) and reindex is ~30-40% faster, uses 10-20% less memory, and flushes to disk far less frequently. 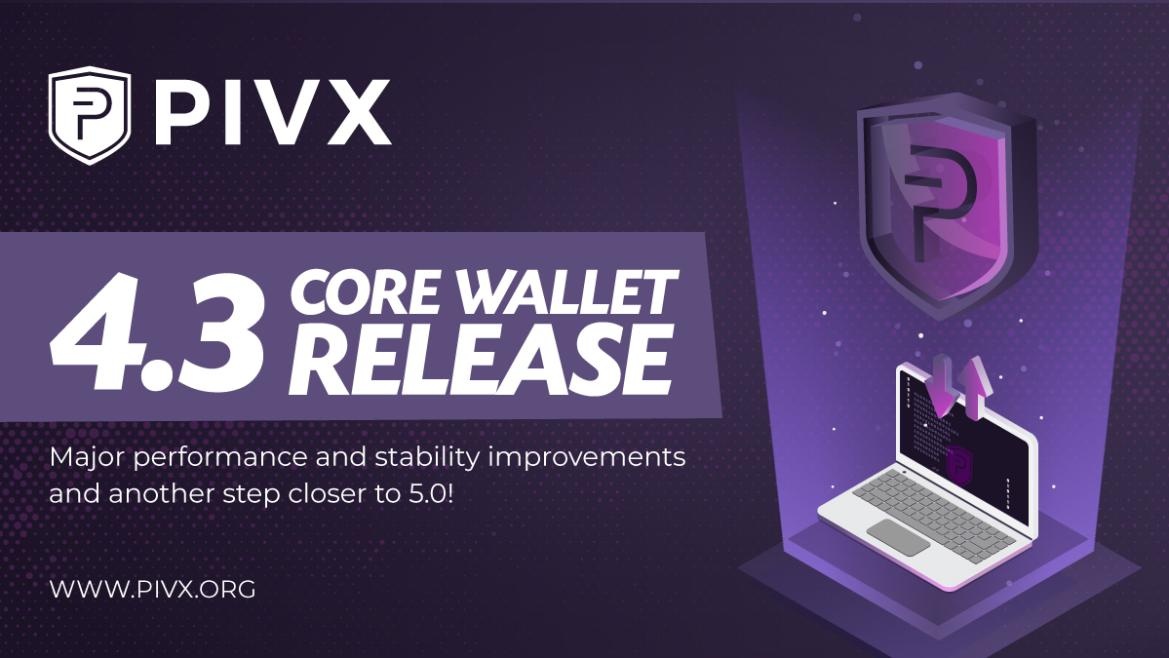 PIVX privacy is coming back better than ever with the highly anticipated 5.0 release, and the custom integration of the Sapling protocol using zk-SNARKs is progressing well.

The protocol is working in regtest, meaning that it has been developed to a point where it is working in a private dev-only network. More and more public Sapling code work is popping up on GitHub, being actively reviewed and gradually to master branch.

Another great tidbit is that the same HD wallet seed that is used for the regular and staking addresses will also be used to generate the Sapling key’s derivation path. This means that pre-5.0 HD wallet backups will be able to restore post-5.0 privacy-enabled coins!

The second tier masternode network of PIVX is also getting a code overhaul with significant improvements to its network security, reliability, stability and performance expected. Core developer furszy posted this last week on Discord:

“we are first doing a full tier two network system revamp. Masternodes, budget and payments systems, all there is being drastically changed in one way or another (managers and sync process). Including the new add of regtest capabilities and a brand new test suite to verify the correct behavior of each of the tier two subsystems.

Once this gets to a solid base point, our own version of DIP3 will surely be ready and pushed with some fireworks.”

If you are currently running 4.1.0 or older, you must upgrade to 4.1.1 or higher NOW (4.3.0 is latest) and then make sure that you are on the right chain by comparing your latest block / hash to the block explorers since 4.1.0 or older wallet is no longer valid on the current network. If you need further assistance on this matter, please join our discord! (You can go straight to 4.3 from 4.1.1 or 4.2.x as well if you wish)

[Important] zPIV support is going away! Change them back to PIV ASAP!

PublicCoinSpend v4 (PR #936) function has been incorporated into the 4.x wallet since January 2020. So it is now possible for anyone with any version of zPIV to spend them back as PIV. However, as per the recent Road to 5.0 announcement, the support for zPIV will cease from 5.0.

So we urge everyone with zPIV to convert them back to PIV ASAP using core wallet 4.3.0 and request assistance in PIVX Discord public #support channel if you run into any issues or simply have questions on how to.

Excluding merges, 6 authors have pushed 168 commits to master and 184 commits to all branches. On master, 222 files have changed and there have been 9,515 additions and 5,808 deletions.

Anyone and everyone is welcome to contribute to our code on GitHub, and they will all go through the same process of multi-dev peer review and will be if it gets enough ACKs!

We also welcome all translators who can assist in making our wallets multi-lingual! From now on, our core wallets will only include support for languages that are at least 80% translated on Transifex. So any extra assistance in this area would be greatly appreciated! https://www.transifex.com/pivx-project/