However, in order to fully inform you about all the advantages of using new generation money, I would like to invite you to consider the main features of PIVX.

The most pressing issue, and especially for small businesses, is transaction fees. A more depressing picture is in those countries where only state-owned banks operate directly, or where there is low banking competitiveness. In these countries, transaction fees can be as high as 20$, and this greatly affects the development of small businesses. And over time, this leads to the fact that small businesses are eaten by large enterprises. Imagine that you sell your products to customers in another part of the planet every day. Commission eats up a significant portion of your profits (and this does not include third party commissions if you list your products for sale on the internet services, like eBay). You will have to raise the prices of your products, which will most likely negatively affect your competitiveness.

Thanks to the PIVX economics, the transaction fees are negligible and do not even reach 0.01$ (the data is relevant as of September 3rd, 2020). Unlike bank transactions, these numbers do not depend on the payment amount and the final recipient.

The speed of the transaction is also an important factor in doing business, since it is responsible for the operativeness, and in some cases it can even become the subject of heated lawsuits or disrupted deals. Let me give you an example. You have received an order for product development with a specific deadline. In order to fulfill the order, you purchased the material in another country. However, the supplier is in no hurry to send the material until he receives the money in his bank account. Of course, you can speed up the transaction process, but again – you will spend a large amount of commission on it. And even in this case, the bank does not give any guarantees, and may even freeze the transaction if it deems it necessary.

When making transactions within the blockchain, the implementation of the transaction, namely the receipt of funds by the end user, occurs instantly – within 60 seconds (the data is relevant on September 3rd, 2020). No centralized organization can affect the speed of a transaction or freeze it.

Since relatively recently, bank cards have the opportunity to pay for purchases using a chip, without entering a code, cases of card thefts have become more frequent. There was an interesting case with me. I was called on the phone supposedly by a representative of my bank, who said that money had been transferred from my account to a suspicious account. In order to cancel this transaction, the deceitful bank representative asked me to tell him my bank details. And many bank users (mostly far from technologies, for example, retirees) fall for this deception. People are increasingly at risk of being robbed because the bank is not diligent enough to take care of the customer’s safety.

With PIVX, you are your own bank. No one can steal your money from a mobile wallet, as it is protected by a password, the code of which only you know. No one can call you as a bank representative, since your money does not lie with third parties.

In this economic collapse, can your bank offer you passive income of 8%? I’m sure that at the moment, they cannot offer you such a service at all (at least banks in my country do not offer this).

Whatever the economic and political situation in your country and in the world in general, with the help of PIVX you will always receive passive income. The income may vary depending on the volume of stakers and the number of masternodes, but in general it will be approximately equal to 8% (data is relevant as of September 3rd, 2020).

In connection with the economic collapse in the United States, which began with the spread of COVID-19 across the planet, the Fed began to print US dollars without limit and more than 3 trillion US dollars were printed this year alone. I would like to remind you that US dollars are not tied to gold, and as we can see already, this directly affects the dollar rate, which is weakening relative to stronger currencies, and also affects and will affect future inflation.

The PIVX economy is designed in such a way that no economic or political situation will affect the value of the PIVX coin, since the economy is written and protected by the code. PIVX has a tail emission, with a current annual inflation rate of around 5% (as of June 2020), that decays to 0%.

Privacy is our protection for the future. Why is PIVX thinking about it now? Governments around the world are increasingly working to transfer the economy using only non-cash transactions, completely removing cash. According to them, this will eliminate many problems such as illegal transactions, corruption, terrorism and so on. However, they do not take into account that there will always be ways to circumvent their decisions, and most importantly, they deprive us of our freedom, since all our transactions, history will be visible to banks, states and third parties.

This will not happen now or anytime soon, but PIVX is already addressing this issue by working on a next generation transaction privacy technology – a modified version of zk-SNARKS Sapling. With the implemented privacy technology, you will not have to fear that your data, transaction history will be known to third parties. All this data will be encrypted and hidden from prying eyes.

As much as you get used to cashless transactions, as they are easy to use, ultimately it will lead to the fact that you will pay more, receive less, wait longer and always report your activity.

Protect yourself, your funds, security and privacy with PIVX! 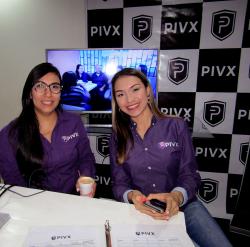 Expo Entrepreneurs Fair in the City of El Tigre – Venezuela