Who Are the PIVX Panthers?

My name is Danielle and my husband’s name is Dean. We became interested in robotics about 5 years ago when our son joined the Cyber Gnomes robotics team in new Lowell ON. My husband became a mentor with the Cyber Gnomes the following year and mentored the team in the build of their robot and the programming of it as well. After seeing how robotics changed the lives of the student’s involved it was decided that we needed to bring robotics to Barrie.

The PIVX Panthers are a VEX EDR Robotics team from Barrie, ON, Canada. We are competing in the 2017-2018 VEX IN THE ZONE Competition.

We chose the VEX robotics program because it’s a worldwide program and one of the largest robotics competitions. It is also very cost efficient. This 2017/2018 season we have proved that we CAN win and advance on. The students have built a great robot that can play the game well. 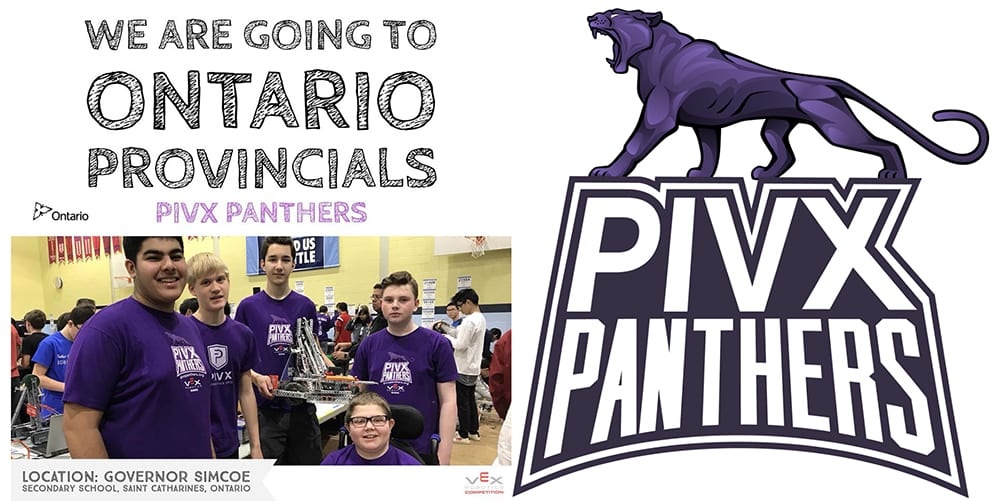 We have won many awards this season for great teamwork, sportsmanship, judges award, energy award, and skills award! Now we are gearing up to go to the provincial tournament held in Saint Catherine’s, ON, Canada on Feb 24, 2018. 72 of the best teams from all over Ontario will compete to try and win a ticket to the World Championship, where teams travel from all over the world to compete.

This is the first time our team has advanced on!

VEX is an international robotics program. The VEX program is easy to pick up and very user-friendly, so it has attracted the attention of Barrie’s youth. We believe it is very important for youth to discover, and develop, a love for robotics and automation because of all the employment options it opens. The advanced skills in STEM subjects (Science, Technology, Engineering, and Math) that can be learned in the robotics program is the way of the future.

Whether they’re used for exploration, safety, manufacturing, or medical purposes, robots are undeniably becoming more common and popular amongst business owners and manufacturers.

Tournaments are held year-round at the regional, state, and national levels; local champions go on to compete against the best in the world at VEX Worlds each April!

Sponsorship is very important to our team as it helps buy parts for the robot, new control systems, as well as help with competition and registration costs.