Both Dash and PIVX have their governance systems setup such that only Masternode owners can vote. While I’m sure it made sense at the beginning, considering that at the time the majority of power was centralized to coin creators and developers, I think that it has become abused through time and is completely unfair. Here’s why, and why I think it’s time for a change.

Note: Full disclosure; I own both Dash and PIVX.

I don’t know why Dash decided that only Masternodes can vote. I suspect it has to do with being able to cryptographically prove the votes are legitimate. Further, it was probably considered inclusive of the community when Dash was really inexpensive, since anyone could buy enough to own a Masternode and vote. As well, it ensured that people who have more ‘skin in the game’ get more votes. The idea being that the more someone has invested, the more likely they are to ensure they are informed about the issues being voted on, and the more votes they have. I am not going to get into details here, but Dash has grown dramatically without making adjustments to the power structure and power distribution of their governance model. This has created issues we want PIVX to avoid.

In some ways, what has occurred with DASH almost mimics the problems we’ve seen with Bitcoin of recent. If you think about it, Bitcoin has become this behemoth and factions are arising casting ideals and ideologies against one another, where “power” lies in the hands of those with the most hash. Thus, instead of millions of individuals mining away on their GPUs (which was apparently Satoshi’s original intent), power has become centralized to massive mining farms. This is similar to Dash early adopters, who were able to accumulate enough Masternodes, now hold the “power” to make decisions …. thus power becoming centralized.

So, why does PIVX require that only Masternode owners can vote? The short answer is that the PIVX inherited that requirement since it is a code fork of Dash. Their governance design was simply accepted without any modification, as a lot of focus was turned towards implementing other coin features (such as PoS).

I believe that Dash is now ‘locked-in’ to their broken governance model. Imagine asking the Dash Masternode Owners to redistribute their voting power to everyone that holds even a small amount of Dash. It will most likely never happen, or at least to me it sure feels like it won’t. Sure – they may reduce the requirements of running a Masternode down to just 100 Dash, instead of 1,000. But that just means the current owners all get 10 X as many votes. Nothing really changes. Further, in order to redistribute voting power, Dash would have to switch to PoS. Not an easy change at all, especially with all the integrated applications they have with Evolution or partners etc.

PIVX on the other hand, is already PoS. It is still significant work to redistribute voting power such that it is automated at the code level so that anyone who owns PIVX can vote, but it can be done. I fully agree that Masternode owners should receive a larger reward than people who only Stake, but that’s because their running costs are higher. Full STOP. Done. That’s it. There is no other difference from Stakers. There is absolutely NO reason for Masternodes to have exclusivity on Governance voting. Let’s fix that!

Everyone has a voice. Everyone should be heard:

Regardless, even if your vote is small, chances are it is common with MANY MANY other ‘small’ votes. Together, those votes will make a difference and should be heard! Currently, in Dash, a single vote requires $100,000 US be invested. Frankly, even then, a single vote makes no difference. If we don’t change the PIVX governance system, we will suffer the same centralized power structure fate, and that is something we as a community would like to avoid. We need to change it right now, which is why as a community we are coming together to find a new way forward.

I plan to submit a PIVX Proposal:

The proposal will not ask for any PIVX funding. It will simply ask for a Yes/No vote for the following statement to be added to the PIVX Manifesto.

“PIVX will work towards a ‘Community Designed Governance’ system that changes the distribution of votes, to include the entire PIVX community.”

In other words, I will ask the Masternode Owners if they agree to this massive change, at a high level only. As the effort progresses, more and more decisions can be made this way, but it is pointless to discuss those at this time. First we need ‘buy in’ with a high-level statement like the one above. This historical stance with and for Community Designed Governance, will echo across the globe. Until now, even the prospect of decentralizing, restructuring, and redistributing the voting power that has always been exclusive to Masternode owners, been considered.

One of the new ‘Best Practices’ (optional) that we have been working on, is called PPL. This stands for Proposal Promotion Level. The idea is that it will define a rating system that motivates the proposal author to first discuss the idea with the community as much as they can, everywhere they can. Then, once feedback has been collected and taken into account, the author can submit a proposal, filling out the PPL value, with links to the sites/forums etc. that justify there has been enough discussion to warrant that PPL level. In other words, the PPL will define how much effort the author made to ensure the entire PIVX Community was informed.

My ‘Call to Action!’ for everyone reading this:

This is very simple. Provide feedback! Share Everywhere! Discuss, Comment, Post, Like, Criticize, Compliment, Rant, Rave, it doesn’t matter. All feedback helps. You are part of the ‘Community’, the FIRST word in ‘Community Designed Governance’. It needs your input!

Vote ‘indirectly’ now through participation and debate, so you can vote for REAL later on, without the need to own a Masternode!

“We can change the world and make it a better place. It is in your hands to make a difference.” ~ Nelson Mandela

Please join the discussion at forum.PIVX.org! 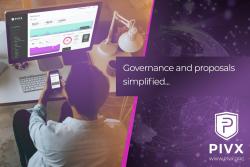