We’ve had some significant development happening the past two weeks with numerous new features and fixes being submitted including numerous contributions by our community developers CaveSpectre11 and akshaynexus. It is really awesome to see some new synergy happening between the core and community developers and I hope more developers will join in our venture. Remember, PIVX is open source and welcomes all contributions, not to mention having some dedicated budget portion in the core dev proposal set aside for community dev work!

What we mean by this is that we need to make sure all current zPIV held by all users are able to be safely spendable back to PIV. With our last 3.3.0 update, v2 zPIV spending was enabled and this resulted in our network zPIV balance to drop from 4.7 million zPIV down 1.58 million zPIV in less than 3 weeks!

[Side note] Guessing where the converted 3.1 million zPIV went; since July 1 when zPIV v2 became spendable, total masternode count increased by approx. 260 and our average network staking difficulty has also seen an increase from around 180k to 190k. So there seems to be some correlation that a lot of the converted zPIV may have been put back into our network as either new masternodes or staking. 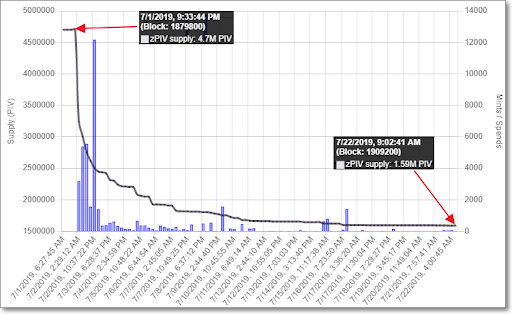 Now the question would be, why do we still have 1.58 million zPIV remaining unspent? This may be due to lost/deleted wallets, being locked out (forgot password), many users still unaware that it is now spendable, wanting to keep them private (if eligible), and/or are legacy v1 zPIVs that are not yet spendable (until v4.0 wallet release with PR #936) etc.

Once v4.0.0 is released with all zPIV spendable, thus ensuring all users are now able to transfer their coins freely, then the developers will finally be able to really start researching and working on the privacy function of PIVX, followed with a formal write up on what is proposed and why.

But for now, the sheer amount of work that our core & community developers are putting into PIVX is simply astounding and provides strong reassurance of how well PIVX will continue to be developed for the times to come.