Conversely, when we look at the recent price increase from the $4000s to the $8000s, the media is once again touting that bitcoin is taking off once more, and is seeing a glorious rise.

But why is it that we consider the $10,000 price point failure, and an $8000 price point a victory? Join me as I go over why short-term price analysis means nothing – only the long-term matters.

If one were to look at bitcoin prices from their first appearance on price charts to today, draw a single point at the starting price and the single point at today’s price and draw a straight line between them, you will see a very clear and steady upward trend.

The point of this exercise is not to claim that bitcoin will inevitably go up. Instead, it is merely a means of demonstrating that over long time scales, bitcoin and most of the major cryptocurrencies (including PIVX) have seen a historically continuous upward trend. 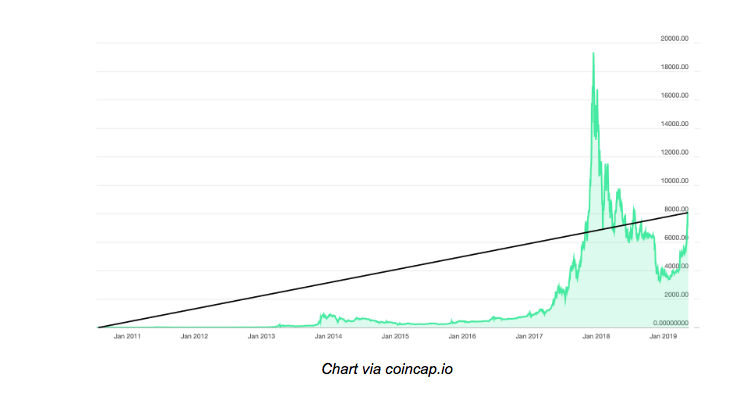 But simply drawing a line between the start point and today’s value ends up hiding a lot of movements both upwards and downwards. Most importantly, it essentially erases the entire 2017 bull run since it appeared and deflated so quickly. This exercise also demonstrates that bull runs like the one we saw in 2017 don’t have a significant impact on long-term prices. While they may cause short-term fear, greed and turmoil, they do not necessarily spell the victory or demise of any cryptocurrency.

Let’s take a look at PIVX. When PIVX first appeared on the charts in March of 2017, it had a list price of about $0.17. Today, that price is now approximately $0.63. Using the straight-line method, we can see that the price has increased by a factor of about 4. This is indicative that PIVX could be a good long-term investment for some people. That’s not investment advice, just my opinion.

Short-term price movements matter to some people, however. The people that care most about short-term movements are flippers. “Flippers” is a term that describes people that speculate in cryptocurrency and want to make a profit by buying low and selling high again and again. Flippers can make a lot of money if they are lucky, or lose all their money if they’re not. Over long enough time scales, flipping is generally not a profitable strategy unless you have absolutely perfect timing, which is nearly impossible.

When asset prices begin to drop, so-called “weak hands” will begin to sell. This sell pressure pushes prices downwards until all of the weak hands have given up their holdings. Presumably at a loss. This act of selling for a loss is what predatory flippers survive on.

While it’s easy to claim that flippers are just greedy and selfish people, they do serve a necessary purpose in the ecosystem. Namely, they provide essential liquidity – meaning there is someone willing to buy your coins even when prices are dropping. Flippers can also cause prices to go up in some circumstances which is good for long-term investors.

My point in discussing flippers here is that only those who want a quick profit at high risk should be interested in what happens in day-to-day prices. The rest of us should only be looking at long term trends.

The next time crypto prices at large begin to drop, I suggest you ignore all the alarmists that yell and scream that cryptocurrency has reached its conclusion and the return to zero is inevitable. I would also advise great caution when those same people shout from the highest mountains that everyone should buy as much cryptocurrency as possible as the rocket ride to the moon has begun.

These alarmists generally all have one thing in common – a very narrow perspective on time.

Every cryptocurrency that has seen at least some degree of success is generally at a higher price today than it was when it first launched. PIVX is a great example of this. So are other longtime favorites like Ethereum, Litecoin, and so on. Again this does not mean these currencies are guaranteed to always go up in value. Instead, it is merely a highly useful data point that demonstrates a steady, long-term trend.

To sweeten the deal even further, those who hold a long view of the market and hold PIV can benefit from not just the potential upside of price changes. PIV holders can also stake and run masternodes to further grow their holdings.

If anything, cryptocurrencies like PIVX are a dream come true for long-term holders. So let the flippers flip, the alarmists alarm, and the weak hands to be weak. Pick a strategy that works for you and hang on tight. That’s what I’ll be doing.

What do you think? Do short-term price movements matter, or should we just focus on the long-term only? What about both short and long-term? Leave us a comment below with your thoughts.

A Response to the Article: PIVX and 200+ PoS Chains Currently Vulnerable; Chains Already Under AttackMay 24, 2019